A humble PLC saves the day

We recently had a request for some legacy control boards needed to run a refrigeration system's compressors. They were critical components in the motor-starting protection system. The boards themselves were simple enough, just four digital inputs, some pre-defined set-points, relay logic and timers as the processing functions, and four digital outputs. The problem was that they were discontinued over a decade ago.

Two options presented: The first would be to allow the failure to force the change and replace the old but still serviceable refrigeration system in its entirety. This would involve a prolonged shutdown, a crane lift, and huge loss of revenue during the several weeks procurement process of new equipment. The second would be replacement of the failed component; a temporary repair that allowed the revenue stream to continue while preparations were made for a planned and controlled permanent repair with minimal loss of revenue.

After a lengthy search the answer was clearly 'no longer available' and getting replacements manufactured would be a protracted and costly process. Thinking laterally, a small PLC with four digital inputs and four digital outputs would fulfil all of the engineering requirements. Overkill? Maybe, but the resulting solution cost less than the last control board purchased as a spare, takes up less space in the panel, is available from stock, and can be programmed to fulfil a variety of roles. 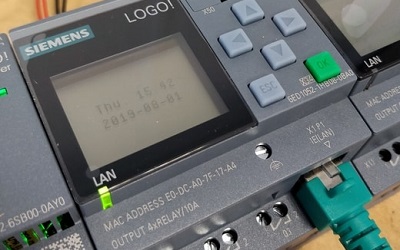 Result: one day shutdown and business as usual until the new packaged plant is delivered. Failure of a critical component on legacy controls is not a showstopper. A cost-effective solution can be engineered to fit perfectly.